Councillor Manro Vice Chairman of the Parish Council presented Charlie and Callum students at Nova Hreod School with a Community Service Award for their hard work earlier this year when they cleared rubbish around Basil Close play park in Haydon Wick.
The Parish Council was alerted to some car tyres, metal objects, and general waste which had been piled up by a bin at Basil Close Play Park Haydon Wick. At first we wondered if this was fly tipping, but it soon became apparent from Facebook comments that two young lads had spent one Saturday morning clearing this rubbish from the hedgerows around the play park.
As their identity was unknown it took some time to locate Charlie and Callum, but with the help of Facebook our Officers were able to make contact and arranged with Nova Hreod School to present them each with a Community Service Award for their fantastic efforts in keeping their local area clean and tidy.
During the presentation Charlie recalled how hard it was hard pushing the tyres up the slope to get it to the bin, and how there was a hedge which was hard to get into, but Callum got through to pick up the rubbish and his jacket got stuck on the branches.
Councillor Vinay Manro praised them both for their efforts, and thanked them for thinking about their local play park, the public and local wildlife.
#haydonwickheroes 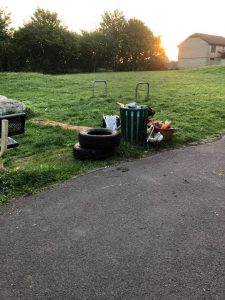 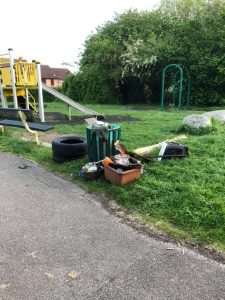 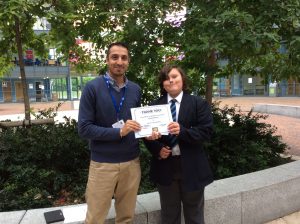